Well for a Visual Studio 2008 user using Visual Studio 2010 is a nice experience. I am having the feeling of up gradation. Now I can work with .NET 4. I like any colour which is in blue shade. So I like the Visual Studio 2010 colour which is navy. Though I am using Express Edition so there is no option for changing the theme for me. I think the IDE is nicely fit for LCD monitors and clear type fonts. The start page is modified, nicely fitting all the information. New project window has also changed, now it have bigger and bright icon for the different project templates. The Consolas font for code is nice and better than Courier New. Consolas is also a clear type font. Now I can zoom the code text from the lower left corner of the IDE. One it have two modes of completion, one is slandered and other is suggestion. Slandered mode is the normal which was in the old Visual Studio. Suggestion mode is like a suggestion while you are typing your code. It will not complete your typing but only give you a suggestion. Window layout is familiar for me. Now I can set two different widths for the windows when they are in pinned mode and when they are in auto hide mode. I can view the windows in full screen mode. I can also place the windows out from the working area of the IDE. These things were missing from old version of Visual Studio. Now I can switch basic and expert settings more easily from the Tools menu. A better full screen mode is also there. For me it is a nice IDE to work with.

I try to hide the Toolbars and Windows which I am not using regularly. It helps me to clean up the display of my IDE get bigger working area. I always hide all the Toolbars without the standard and text editing Toolbars. I place the Toolbars in one row at the top of my IDE, so that I can get more places for my code. Sometimes I also prefer the full screen mode with no Toolbars and Windows. In the case of windows I also prefer to show only the windows which I use regularly. Toolbox at the left, Solution Explorer, Class View, Database Explorer and Properties at the right hand side, Error List and Output window at the bottom portion of the IDE.

Those who are not using Visual Studio 2010, hope it will encourage you for an up gradation. Those who are using or have used, please tell me about your experience. 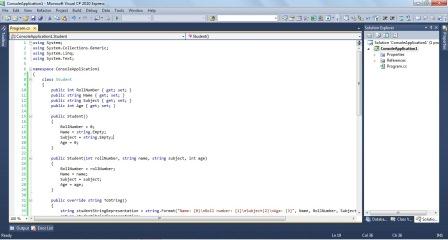 I am Arnab Roy Chowdhury. I am a software developer and trainer living in India.